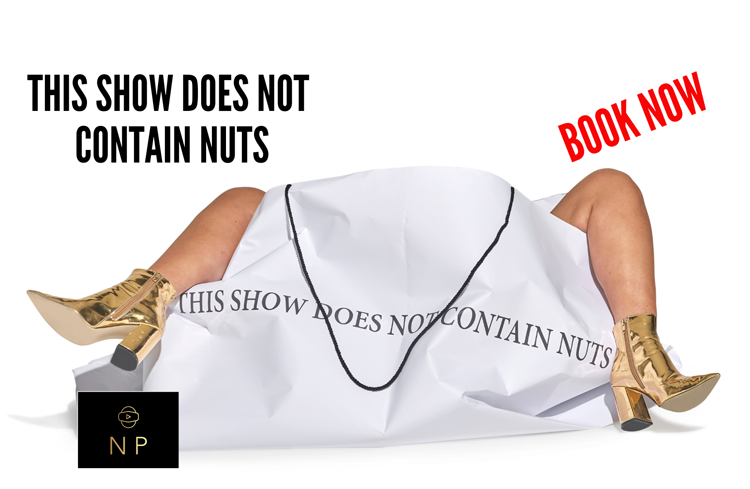 See Maddi Sharkey and her all-female comedy crew in ‘This Show does not contain Nuts’  live on stage at The Grand in Clapham on Tuesday 4th December, 8pm.

We recently had the pleasure of chatting with Maddi Sharkey about her drive to write and perform comedy after a career in banking and fashion.

Back in 2008, after Lehman Brothers folded and the banking world crashed, Maddi left the City and turned her hand to writing comedy … as you do.  She had left London and her second child had arrived;  despite her husband remaining in banking and continuing with the daily commute, Maddi had a burning desire to write and decided she wouldn’t go back.

It took her a while to work out how she would use her writing. It was always comedy and she experimented with sitcoms, short films and books but it was later, after attending some inspiring workshops, that Maddi realised her work would be diluted if presented in any format other than stand-up comedy.

Maddi considered writing for others but ultimately decided the only way to find out how to present her work genuinely was to get up on stage and perform it herself! To test her material, Maddi bit the bullet, got in the car and drove to London. She threw herself into the comedy circuit starting with the Comedy-Store.

The first night she stood up on stage at a King Gong night, where anybody can get up on stage and see how they go, and did a debut two and a half minutes of stand up. It bombed … in hindsight, Maddi muses that it was never going to go well, she had thrown herself into a bearpit with absolutely no experience. But that was the idea and it was a beginning, this experience and later ones taught her a million things as she started to learn the ropes. She continued to do the rounds of a few other ‘salubrious’ comedy stages in London and began to understand the mechanics and heart of the comedy world. 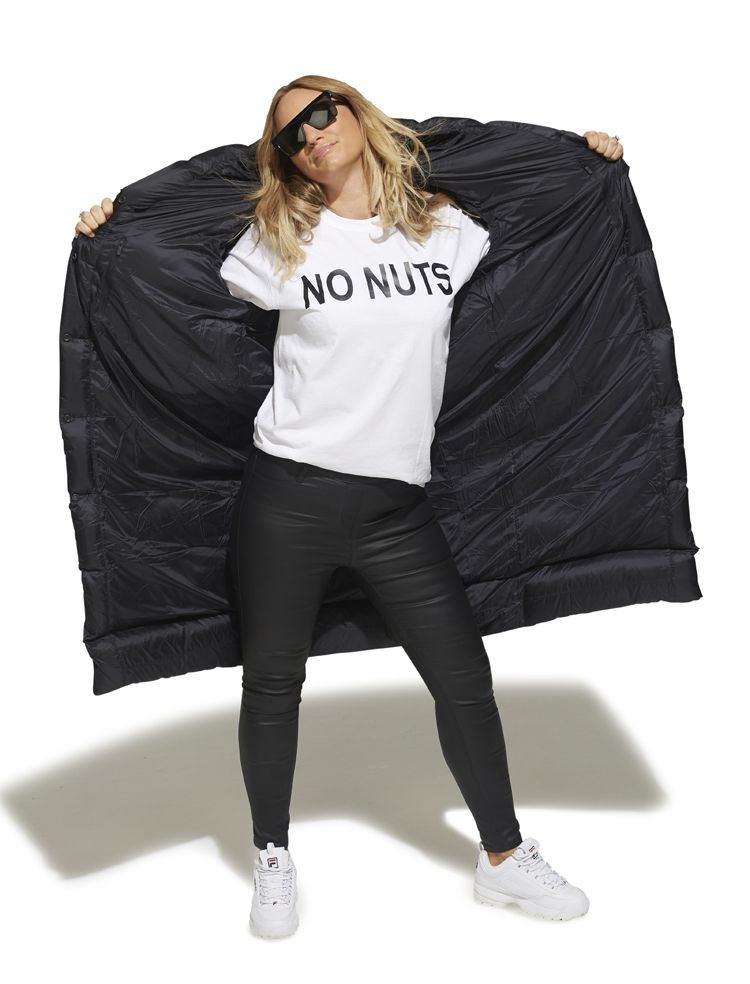 Maddi began to see this was a totally different world and that in fact, it was pretty awful. We talk about living in ‘a man’s world’ in general terms but this was a man’s world and then some. Maddi was finding it difficult to find a place and a voice…

She learned two important things. Firstly, when the compere comes out to introduce the comedians to the audience and lay the ground rules they generally instruct the audience that there is to be no heckling based on race or religion. Not once did she ever hear them mention you can’t heckle based on gender. So “if you have a pair of boobs, they can go for you.” There is nothing that they can’t say and “let me tell you, I heard everything!” she recalls. There are no holds barred in these places, she explained.

Secondly, as if this isn’t bad enough, perhaps due to this, women on stage tended to focus solely on self-deprecating humour that always referred back to their looks, or their size or their colour but never in an empowering or positive way, only ever negatively. Maddi was really shocked and saddened that the comedy world had still not advanced past this. It felt like female comedians had to sacrifice all that they are just for a laugh. It was “soul destroying and depressing,” she lamented.

But it was out of this depressing experience that Maddi’s show was born! She decided that she needed to create a platform for female comedians to escape this “dirty, dark world where they are heckled mercilessly.” She is challenging the comedy world to provide a different kind of funny.  Something fun and beautiful where women can tell their stories with pride, oh and guess what, a show and its stars can be beautiful and glamorous and still be funny! She’s created a proper show out of comedy by adding glitter, sparkle and music.

Maddi has a multi-faceted background; in her early career, prior to entering the banking world, she studied at the London College of Fashion. She believes this grounding in the world of fashion has influenced everything she does. She loves glamour and for things to look beautiful and wants women to be unapologetically beautiful. She believes that women should be able to go on stage and look however they want to look and be still be hilariously funny and not be put down for that.

Someone once wrote in relation to a female comedian “you can’t ever be funny because you’re too pretty”. This is the nonsense that Maddi refers to; she’s frustrated because people are so accustomed to women only being funny if they’re putting themselves down about looks, weight or appearance in general. She’s determined it shouldn’t be about that; anyone and any woman especially, can and should be able to be funny. Maddi just wants them to have a platform to do that no matter what their boobs or their bum might look like!

Maddi’s dream is for the shows to be so much more than just a funny person on a stage, although that, of course, that would be a good start! She’s adamant that this is about creating a thing of beauty and glamour and humour and humility – expect a proper show from start to finish!

The show came into being three years ago close to her home in Henley-on-Thames where she’s created a huge following. The audience is not shocked by anything, they love it. The momentum of the shows built up moving to other great venues such as Soho Farmhouse and Henton Theatre. All have been sell-out shows through word-of-mouth and zero marketing budget!

It’s inevitable that the show would make it to London and despite the three year build up and success outside the larger cities, this is an exciting development – it feels like a debut in itself. Maddie chose The Grand in Clapham for their first London show because of its romantic and inspiring setting. It’s a stunning theatre and an inspiration for all budding thesps. What she really wanted was “an ornate and beautiful building” to be a direct contrast to the drab comedy dives that so uninspired her on the comedy circuit. It is the perfect place to show off the beauty of the women on the stage both inside and out.

This is a show that provides light relief and meaningful material in equal measure. It says something subtly without shoving it down the audience’s throats. Not everyone will see or hear some of the subtle messages but it’s important to Maddi that they are there.

While juggling her now 3 children, Maddi is not just an inspiring role-model on the stage; she has all the same challenges that anyone running a busy family has. It’s a constant struggle to keep on top of running a creative business while also doing the school run, after-school clubs and activities, sports kit, packed lunches and teas, musical instruments … “you know how it is”. But she says she chose this route so she could do both. It’s a happy but precarious balance – being there for the kids but also doing something meaningful for herself.

The juggle is set to become even more challenging as Maddi has now planned further city debuts in Birmingham, Edinburgh and Dublin.

So you can expect a very different show. Maddie is the compere – literally ‘controlling’ it from the front! There is a huge amount packed into the ticket price; DJs pumping Ibiza tunes, gin-shot goody bags, four comedians with DJs playing in between each set and a burlesque hip-hop show as well. Sounds like it will be virtually impossible not to cartwheel out of the theatre. Maddi suggests that mums must surely get tired of the WhatsApp drinks round and this can offer them so much more. It will be such an interesting night out for them. They’ll also come out feeling empowered as they’ll know that everything has been created and performed by women.

It sounds to us like the grungy bearpit of comedy hell will be exchanged for a night of fashion, glamour and empowerment with a wild dusting of laser-sharp wit and humour. No boob-chat or sexist heckling in sight, just strong, intelligent women doing their thing and creating a night to remember. 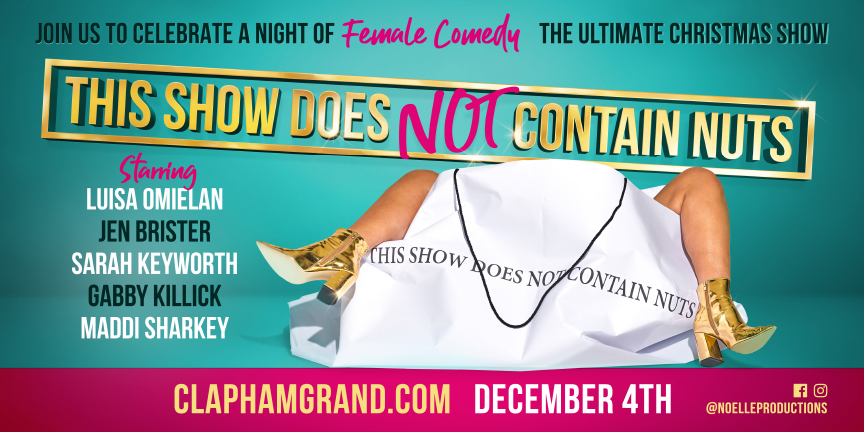 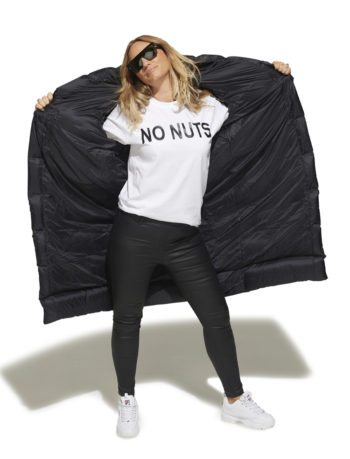